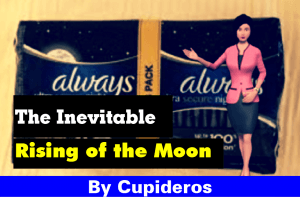 The Inevitable Rising of the Moon by Cupideros

“Thank God He used women to keep the human race from going extinct. This life’s problems, both hard, terrible, and baffling, did not outweigh the pleasures of developing our lives and soul.”

Adina, my daughter, and I watched the original Terminator movie last night. It is such a kick-ass classic film. We liked watching strong women, and almost any action-adventure flick got us couch and popcorn ready. Sarah Connor’s transformation caught my daughter’s young blue eyes. “She was such a wimp — at first,” my ten-year-old daughter, Adina quipped.

I laughed. I poured a lot of moral standing and self-awareness into that young lady. But one never knows if anything will stick; however, that is another blog for another day. Today, Adina was attending youth volleyball practice when a package arrived at the door with her name on the label. I wondered who would be sending my ten-year-old mail?

Always. The name slipped my memory until I opened the package and saw the contents. I wanted to scream in frustration. Pads, pantyliners, tampons, the whole toolkit screamed out the burden of womanhood. Adina’s big day had not arrived. She got up every morning in a cheerful, take on the world mood. Something I had not done in so many Moons ago. I forgot how that felt.

Now, my daughter would forget. But did she have to be reminded this early? Wasn’t this just a marketing ploy to early-sell feminine hygiene products? I quickly walked into the kitchen and raised my hand in alarm to throw the disgusting package away when I thought – Sooner or later, Adina will come face-to-face with the Red Lady Mood Swing. Days she will want to rail at the raw ravages of time, stay in bed curled up with a heating pad, pillows, and chocolate bars of all types. I must face facts, not try to postpone the inevitable rising of the Moon.

I sat the package on the kitchen table and considered the contents carefully. I asked myself, “What would Sarah Connor do?” Then, I thought, “Which Sarah Connor?”

Adina asked me already what these were. She’d seen my supplies in the special bathroom cabinet. Why was I so ashamed? Was Adina, my ten-year-old daughter, different than the other daughters in our families stretching back to the caveman days of yor or me? She was my fertile daughter, and this should be a time for celebration, not shaming, fear, and holding a grudge against God.

I prayed there at the kitchen table: God help me to convey the future Moon risings to my maiden daughter in the proper glorious light of nature and logic. Somehow, the dramatic opening scene of Runaways Girls – the all-girl-rock band in the latter half of the 70s — popped into my mind.

Though, I decided not to tell Adina about the Runaways. She needed to stay away from drugs. But I decided then not to throw the Always package away, too.

‘Sure, the company only wanted another lifetime customer. ( And boy would they be surprised when menopause hit the babyboomers.) Always’ product efficiency, my great-great grandmom would have celebrated. And for all their efforts, in spite of Feminism’s continuous attempt to end it, Motherhood goes on, as well.

I was just a baby boomer female reacting to my refuge programming that women were men; women can have it all, and women did not have different biology than men. That women did not experience periods, and men yearned to experience them. Who were these foolish feminists trying to fool? Raison d’etre! If Motherhood was disgusting, then so was periods!

Thank God He used women to keep the human race from going extinct. This life’s problems, both hard, terrible, and baffling, did not outweigh the pleasures of developing our lives and souls.

And women were the moms of the next generation needed to correct the errors of my own generation. Finally, sitting there at the kitchen table, I made peace with God, and my female nature while reviving up to educate my daughter Adina on her feminine essence.

I had a plan. It started when I went to tuck a Ben Franklin in her Always package and said, “Enjoy this, Adina. Life will not always be so easy and carefree. Spend it as you like, Mom.”

Then I thought, fools love fools. Life is unfair, and accepting the victim-status stardom, prevalent in Feminism, will not be my daughter’s daily mantra. I tossed in a Grant and wrote, “Despite what the boys who love pretty volleyball girls may tell you, Adina, you will not always be paid for simply being what you are — FEMALE! Get over it! Learn some real skills, knowledge so you can find a good husband. If Sarah Connor learned to take care of herself, so, too, can you. Mom.

The Inevitable Rising of the Moon by Cupideros

Abandoned to Makta Island E-book (all chapters)
Two people, a young female violinist and an ex-priest who no longer believes in God, made a choice as they sailed to America from Australia. This caused them to be abandoned to Makta Island, where reportedly cannibals hold rituals. The young violinist and ex-priests struggle with their environment, each other ideas, feelings, and thoughts as they try to survive until another ship passes by the island within 6 months. 98,578 words
https://cupiderosbooks.com/product/abandoned-to-makta-island-mega-novel-ebook-in-either-epub-and-kindle-format/
Posted in Fiction (Poetry or Prose), Generic Beauty Tips, Latest News, Non-Fiction, Prose Fiction, Question Power, Self-Development, Spirituality, Writing

The only thing in life achieved without effort is failure.
Unknown