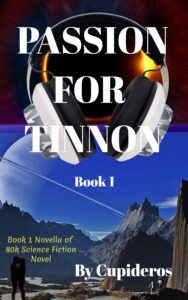 Passion for Tinnon, written in 2006, tackles critical thinking, love, humanity’s predisposed desire to self-destruct and without coming to terms with its human nature that spawns those self-destructive tendencies.  The novel explores how passions that rule human nature and what they often lead to, but in this novel, the hope is can humans, given another chance on Planet Tinnon, can control those passions without creating destructive safe-spaces leading to destructive repetitive ends.  This book explores these topics.

After the demise of Old Earth, Thirteen families escape to a new planet and try to survive the planet’s hazardous conditions and their flawed human natures, but will they solve one or both problems in time.  A riveting SF, Romance, Thriller Novel must-read by Cupideros

In the year 6666 A.D. on a planet not too far from Mars, the hazardous Planet Tinnon exists and forms a home for the thirteen Old Earth families who escape total nuclear annihilation.  Greed, desire for resources, an inability to get along with each other, coupled with a willingness to create the ultimate safespace on earth results in Old Earth’s destruction.

Those who escape to Planet Tinnon started all over.  And painfully after some two millennia, they advanced back to the Old Earth level of technological awareness.  This brought about the old urges and human flaws, and the two halves of Tinnon went to war.  They’ve been at war for one hundred and ten years.

The Gians, who helped the Old Earthlings settle on precarious Tinnon, tried to bring peace to Tinnon.  But the people of Tinnon have a strange passion for the entire planet and not the halves they rule: the Quodorians the West and the Galans the East.

Will the Gians be able to save the Quodarians and Galans people of Tinnon from destroying themselves, or will Planet Tinnon teach them a lesson itself and implode?  Read and find out: Passion for Tinnon, a mega SF, adventure, action, thriller, romance novel you will never forget by Cupideros.

Listen to excerpt from Novella Passion for Tinnon Novella Book 1

Abandoned to Makta Island E-book (all chapters)
Two people, a young female violinist and an ex-priest who no longer believes in God, made a choice as they sailed to America from Australia. This caused them to be abandoned to Makta Island, where reportedly cannibals hold rituals. The young violinist and ex-priests struggle with their environment, each other ideas, feelings, and thoughts as they try to survive until another ship passes by the island within 6 months. 98,578 words
https://cupiderosbooks.com/product/abandoned-to-makta-island-mega-novel-ebook-in-either-epub-and-kindle-format/

There are no reviews yet.