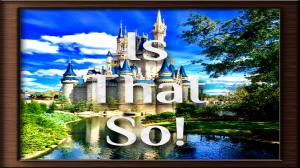 There once lived a Queen whose daughter studied religion and philosophy day and night from the age of three who came to a conclusion life had no meaning. The nineteen-year-old Princess announced to her mother, at the age of twenty she’d take her own life because that’s enough meaningless living. The horrified Queen tried to persuade her daughter to become an Agnostic, Or that being unsuitable, become an Atheist. The daughter refused. The sadden Queen recalled the curious days of her daughter’s youth when she responded to religious and philosophical matters that interested her by saying, “Is that so?” Whereupon, the Queen, would tell her more about the religions, and philosophies known before their day.

So the Queen sent an announcement, “If anyone can make her daughter Princess stop slumping and sit up on her own throne and say, “Is that so?” about a religious or philosophical matter, they would get half the Kingdom. If a man, they’d get to marry the Princess as well.

Well as you can imagine, from around the world many religious teachers, monks, and university professors, and philosophers tried their hand at the matter, but the daughter only said either, “That’s hideous, or outrageous, babble prattle, simple-minded, nonsense or gobbledygook” or other words to that effect. So one day, a family of two brothers and their younger sister, Elaine, thought they’d try their hand at the matter.

The first brother went into the Princess’s throne room and closed the door. After a minute, a loud voice boomed out, “That’s Repulsive! Get out!”

The second brother went into the Princess’s throne room. After a few minutes, a voice echoed, “How horrid! Get Out!’

“Hello, my sister believer. For I too will soon reach twenty and take my own life. For life is meaningless,” said Elaine.
“Ah, then you know how I feel. I’ve heard about the man dying on a ghastly cross. The man who sat under a tree and suffered. About the warrior who conquered the Middle East. Even about the dysfunctional family of Gods on Mount Olympus. I could live for Epicurean pleasure for a while, but what good is it if there is no purpose?”
“Oh, I’ve heard of them, too. And how meaningless. Have you noticed that rain falls on the just and unjust alike?”
The Princess sighed, “Yes, how meaningless. Have you noticed how the woman who sleeps with many guys is a whore and a guy who does the same is a stud?”

Elaine threw up her hands, “Oh, Yeah. How meaningless! I use to be curious as to why some women play around on their husbands, but I’ve come to the conclusion those husband deserved unfaithful wives.”
“Hmmm,” said the Princess. “Have you noticed how there’s is a certain swindler in the country who gets away with everything, dupes nearly everyone and no God or Goddess refuses to stop or punish him?”
“Oh, yeah, like, How meaningless.” And they both laughed.
Elaine continued, “Like I suppose those who are swindled deserve to be swindled because of their swindles or bad karma in the past.”
The Princess guffawed, “How meaningless!”
“I used to think, Princess, if I were a man my life would be different, but I’ve come to a conclusion, their lives are as meaningless as ours, but they just don’t know it because they get to do more things!”
“You’re right,” the Princess said. “And if the Goddess and Gods cannot change people from their less intelligent ways, what purpose is there to life?”
“Yeah, It’s like meaningless. At least Taoism agrees that life is nothing and has no purpose.”
“Of course, but it’s meaningless to talk about something that cannot be talked about!” replied the Princess, enjoying herself for the first in a long, long time.

“Oh, yeah! Quite meaningless, I agree. Nevertheless, I like how there really isn’t any purpose; there really isn’t anything in the universe. Since everything is one thing which is a nothing and everything else is just another of the 10,000 shadows of that Nothingness. And to do nothing with skill and diligence is to do all with great skill and diligence. I mean, we literally can be lazy like the Goddess and Gods in the countless Heavens. All of which are just as accurate a picture of truth as any other, from the man suffering on the cross or the man suffering under the tree or the warrior of the Middle East, or the ancient religion saying God fights against his evil brother or angel, and the battle shall not be decided until later on in the meaningless of time yet to come, which shall never come because people will always have to improve. So improvement can’t be the purpose of the universe because we mere lesser Goddess and Gods, in training, can hardly expect to beat our Mother and Father originators, who in fact don’t have a body or a face and exist in a place we cannot sense or know! We cannot win and escape this game called ‘life’ no matter how meaningless it truly is! Oh yeah, and it is foolish to hope to have hope that life will make any meaning now or in the future except in its folly of meaninglessness because meaningless is a something and you and I are nothing and meaningless. Which, of course, means that we don’t gain a single thing by living or dying. Because we can’t really die because our souls are indestructible, made of that same Nothingness, which even though we think it doesn’t exist, it does, just in an untouchable, unreachable form! We will go on living and living forever somewhere in somethingness or somewhere in nothingness–oh yeah, how meaningless it all is!” And Elaine chuckled and chuckled.

“Is that so?” said the Princess. “We cannot die even if we die? We go on living even in the Nothingness which isn’t really there, but experienceable somehow when we reach that level of development?”

“Oh, yeah!” Elaine said with enthusiasm. “But realize how beautiful and meaningless it will all be! You and I will laugh at all the people who live high or low or in-between who believe they are accomplishing this thing or that, suffering this thing or that, who are doing meaningless work but believe it is meaningful! You and I will be free of all that nonsense of somethingness.”

“Is that so?” The Princess said, sitting up in her throne for the first time. “Tell me more!”
“Sure, I will, Princess. But this Taoism religion-philosophy takes a lifetime to understand even though it’s meaningless.”
“I have time for living a meaningless life,” replied the Princess with a broad smile.

With that, Elaine inherited half the Kingdom and made a good friend and advisor to the Princess who went on to become a wise and gracious Queen, even though she knew she was doing meaningless activities.

If you want to use Realistic Voices in your webcast, podcast, videos, and web pages or stories contact go to cupiderosgraphics.com